Our history shows we started as a small garage-based operation, but quickly grew as our clients knew we would deliver high-quality products on-time and on-budget. Bindery Overload has grown organically, expanding and acquiring staff and machinery as market needs evolved. Today's Bindery Overload has not forgotten its humble beginnings or why we do what we do. Every customer matters, and every job deserves the full measure of our experience and skills. 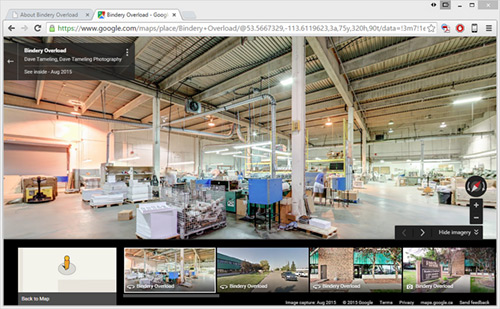 Take a virtual tour through our shop with Google Business View

Donna Winter spent over 20 years in the printing industry, working in binderies and eventually running a medium-size print shop. She knew the work load fluctuations and the volatility of the industry. The bindery was a single-person job one day and required a team of 10 people the next. It could be feast or famine, with every job being a rush.

With her past experience and the support of a few printers in Edmonton, the concept of an independent trade bindery was formed, July 1, 1977. Bindery Overload commenced from the back alley of the family’s double-car garage to handle the overload hand bindery work of printers. The Company established a reputation for quality workmanship, and a commitment to meeting deadlines. As the Company grew, it became evident that more space was required as jobs were becoming larger and more production equipment was needed.

With increased production space available, in 1989 the Company purchased a Pony 3000 perfect binder. It was the only independent perfect binder in Edmonton. The company started producing recipe books, telephone directories, student calendars and more. The Company’s staff doubled, the production volume doubled, and there was no turning back. The Company was becoming a fully-automated trade bindery. The only piece missing was a saddle stitcher.

In 1991, the Company went on to purchase the assets of a saddle stitch bindery. As 1991 progressed, the Company started three additional operations. The Company purchased vehicles to offer delivery services to its print customers. It commenced wholesaling of laminating, cerlox and coiling equipment and supplies through division Provincial Laminating Supplies. And, it acquired mailing equipment to further expand its operations under The Mailing Group.

In 1994, the Company moved to its current location. The arrival of loading docks was imperative as production runs had grown, and semi trucks were arriving daily. A garbage collection system was installed to eliminate manual handling of paper trimmings, and to reduce paper dust so prevalent in our operations. A real-time computer system was installed to track job production. The new plant was modern in every way. Contracts were being won throughout Alberta, BC and Saskatchewan as the Company’s reputation was becoming known throughout Western Canada.

Again in 1996, we searched to bring one-side laminating to Edmonton. Assets were located in the Maritimes and brought to Edmonton. This allowed the Company to laminate report jackets for binding.